"a single strong measure gives the previously completely unemotional entrance area of ​​the technical museum, which had several functional deficiencies, a new, lively appearance. the illuminated mushroom chairs, which are distributed in the waiting area, combine various functions such as - sound absorption, shading, artificial light and seating in one element. we added the playful aspect by allowing children, who are a large group of people in the museum, to climb the objects and slide down from them.”

modern museum operations require adequate service – and this requires space. historical museum buildings face the challenge of being bound to the existing building fabric. the technical museum in vienna was confronted with this problem in the 1990s when it was necessary to create space for a larger reception area, a museum shop and a café, as well as adequate sanitary, cloakroom and cash desk capacities. the architectural solution chosen in the 1990s was a steel and glass cube in front of the historic building. Shortly after the opening in 1999, this proved to be problematic in several respects. the reception area was characterized by strong temperature fluctuations, unfavourable acoustics and air circulation as well as suboptimal visitor guidance. an invited competition followed and querkraft architekten were able to impress with their design for the redesign of the entrance area and museum shop.

the redesign includes the creation of a clear room arrangement and visitor routing with an emotionally inviting room atmosphere at the same time, which improves the existing physical problems in the room. the focus of the solution is multifunctional furniture made of fiberglass and textiles, which also have the functions of shading and reducing noise. when it's dark they bathe the surrounding space in white or midnight blue. the objects, which are reminiscent of trees and can be read as an allusion to the relationship between technology and nature, formally take up the existing steel supports of the room and continue to allow a view through the glass roof to the historical facade of the museum. the shop, which manages with just a few square meters, will receive new, flexible furniture for presenting the products – adapted to the overall design. the implemented design by querkraft sets a dedicated architectural statement that communicates with the existing substance and at the same time meets the functional requirements for a pleasant entry into the museum. 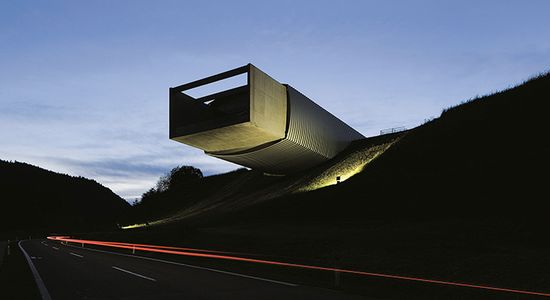 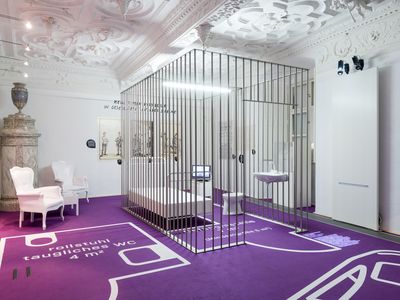