400 metres long, a good 20 metres wide – an unusual site, on which viennese social housing was envisaged. in 2017 we won the limited entry implementation competition with our design for a continuous garden deck out of which seven residential blocks develop.

the main aim was to create quality for both the existing and the new residents. the central element in this regard – “a view of the danube for all” was to be achieved through slender buildings and by adapting the different heights of the new buildings. the inviting shared outdoor space functions as a fifth facade that encourages new and existing users to spend time there, to garden, or to exercise.

the existing public housing behind was treated with respect. the top floor of the garage block in front of it was removed so that more light and sun can penetrate than previously. the undulating rhythm of the existing buildings is continued by the stepped heights of the seven new blocks. the intelligent positioning of these blocks also guarantees sufficient light for the living areas in the buildings behind them.

the activated residential street that runs between the existing buildings and the new public housing is both a connecting and a structuring element for the entire complex. generously sized outdoor staircases provide access to the garden deck of the new buildings on which attractive leisure time facilities encourage communication and exchange. as a kind of planted connecting platform these outdoor spaces create communicative zones where all the residents can spend time. the connection to the surroundings is improved and attractive visual relationships are created. the outdoor space comes alive  and invites interaction.

the cantilevered loggias are perhaps the most immediately striking feature of the new housing. these  prefabricated concrete elements are mounted on the north-western and south-eastern fronts of each building. by swivelling them the views outside and into the private area are deliberately directed towards the danube. consequently, the outdoor space remains private, and the special view is given the attention that this site calls for.

each loggia with its tapering walls was produced as a single piece in the concrete works. the loggias were hung in place on site, fixed to just 4 bearing points. through a clever variation of the geometry a lively hybrid of balcony and loggia type apartment was made. special fixtures for equipping the balcony area encourage the new residents to become actively involved in shaping their private outdoor space.

in close collaboration with artist ingo nussbaumer, who in his work deals intensively with colours and their effects, a colour palette was developed that is specially adapted to the site and the surroundings. as one walks through the complex, differently coloured spaces are  created, which, depending on the light and the time of day, have a different effect on the viewers. 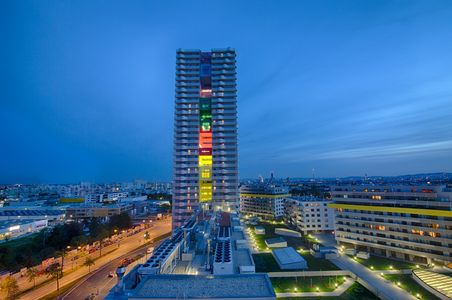 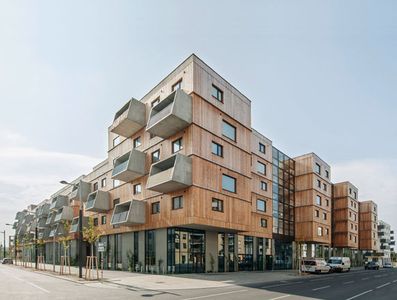 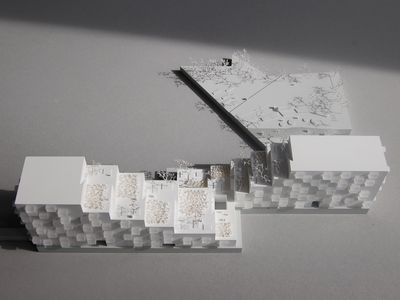 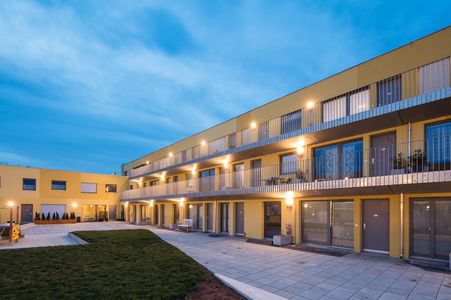